This title is a bit exaggerating since handwriting recognition is an advanced topic in machine learning involving complex techniques and algorithms. In this blog I’ll show you a simple demo illustrating how to recognize a single number (0 ~ 9) using R. The overall process is that, you draw a number in a graphics device in R using your mouse, and then the program will “guess” what you have input. It is just for FUN.

There are two major problems in this number recognition problem, that is, how to describe the trace of your handwriting, and how to classify this trace to the give classes (0 ~ 9).

For the first question, we could first detect the motion of your mouse in the graphics device, and then record the coordinates of you mouse cursor at a sequence of time points. This could be done via the getGraphicsEvent() function in grDevices package. For example, after I drew a number 2 in the graphics window like below, the coordinates of each point in the trace were assigned to a pair of variables px and py. 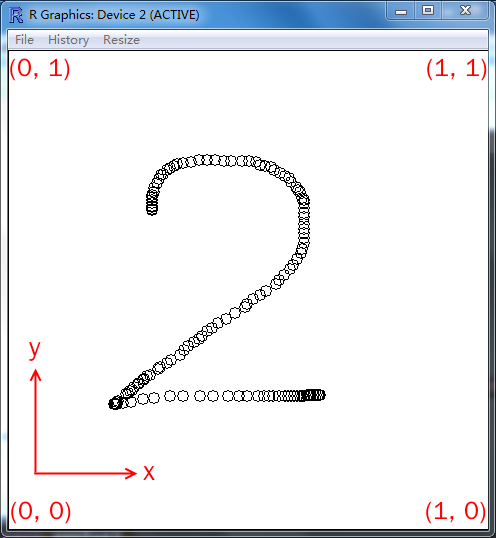 The scatterplot of px and py versus their orders in the trace is shown below. 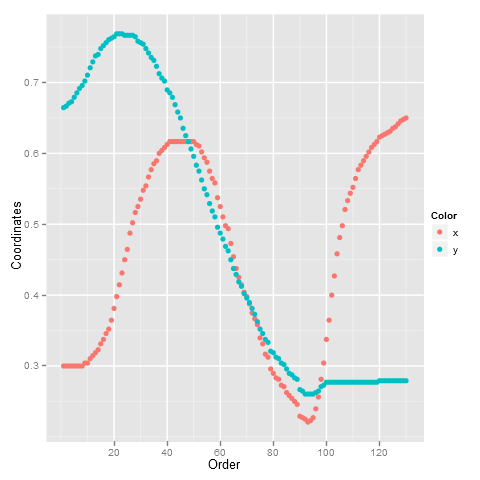 To be comparable among different traces, we normalize the Order to be within (0, 1] (that is, transform 1, 2, …, n to 1/n, 2/n, …, 1). Also, since this recording is discrete but the real trace should be continuous, we use the spline() function to interpolate at unknown points, resulting in the following figure. 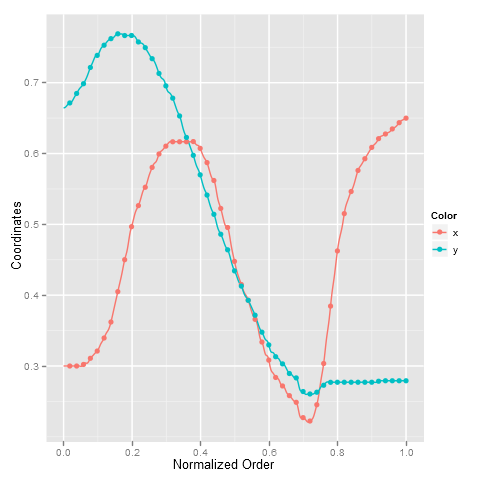 So it comes to the second question – given a trace, how to classify it? Obviously we first need a training set, the recording points of number 0 to number 9 generated as above. Then we’ll compare the given trace with each one in the training set and find out which number resembles it most.

Several criteria could be used to measure the similarity, but some important rules should be considered. We still use $r = (x, y)$ to represent the recording points of a trace, and use $Sim(r_1, r_2)$ to stand for the similarity between two traces. Notice that this similarity should not be sensitive to the scale and location of traces. That is, if I draw a number in another location in the window, or in a larger or smaller size, the recognition should not be influenced. In mathematics, this could be expressed by

In my code, I simply define the similarity as the sum of Pearson correlation coefficients of x and y, that is,

The whole source code is (note that I use 500 recording points instead of 50):

To run the code, you must load the “training set”, the file train.RData, into R using the load() function, and then call guess() to play with it.