This is a pretty old topic in R graphics. A classical article in R NEWS, Non-standard fonts in PostScript and PDF graphics, describes how to use and embed system fonts in the PDF/PostScript device. More recently, Winston Chang developed the extrafont package, which makes the procedure much easier. A useful introduction article can be found in the readme page of extrafont, and also from the Revolution blog.

Now, we have another choice: the showtext package.

showtext 0.2 has just been submitted to CRAN. Below is the introduction of this package excerpted from the README.md file. In short,

We are now much freer to use system fonts in R to create figures.

What’s this package all about?

showtext is an R package to draw text in R graphs.

Wait, R already has text() function to do that…

From my own experience, I find it always troublesome to create PDF graphs with Chinese characters. This is because most of the standard fonts used by pdf() don’t contain Chinese character glyphs, and even worse users could hardly use the fonts that are already installed in their operating system. (It seems still possible, though)

showtext tries to do the following two things:

Why pdf() doesn’t work and how showtext works

Let me explain a little bit about how pdf() works.

To my best knowledge (may be wrong, so please point it out if I make mistakes), the default PDF device of R doesn’t “draw” the text, but actually “describes” the text in the PDF file. That is to say, instead of drawing lines and curves of the actual glyph, it only embeds information about the text, for example what characters it has, which font it uses, etc.

However, the text with declared font may be displayed differently in different OS. The two images below are the screenshots of the same PDF file created by R but viewed under Windows and Linux respectively.

This means that the appearance of graph created by pdf() is system dependent. If you unfortunately don’t have the declared font in your system, you may not be able to see the text correctly at all.

In comparison, showtext package tries to solve this problem by converting text into lines and curves, thus having the same appearance under all platforms. More importantly, showtext can use system font files, so you can show your text in any font you want. This solves the Chinese character problem I mentioned in the beginning because I can load my favorite Chinese font to R and use that to draw text. Also, people who view this graph don’t need to install the font that creates the graph. It provides convenience to both graph makers and graph viewers.

To create a graph using a specified font, you only need to do:

Only the steps marked with (*) are newly added. Below is an example: 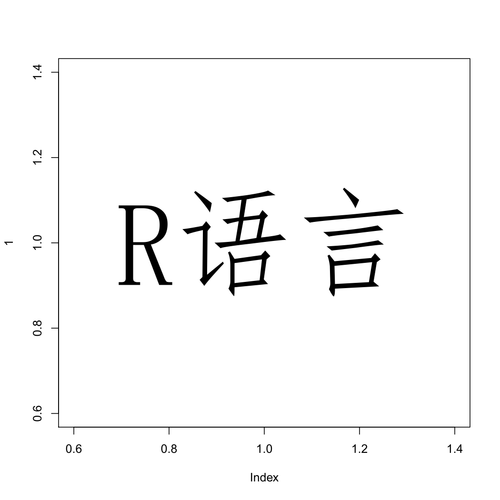 The use of intToUtf8() is for convenience if you can’t view or input Chinese characters. You can instead use

This example should work fine on Windows. For other OS, you may not have the simfang.ttf font file, but there is no difficulty in using something else. You can see the next section to learn details about how to load a font with showtext.

Loading font is actually done by package sysfonts, which is depended on by showtext.

The easiest way to load font into R is by calling font.add(family, regular, ...), where family is the name that you give to that font (so that later you can call par(family = ...) to use this font in plotting), and regular is the path to the font file. Usually the font file will be located in some “standard” directories in the system (for example on Windows it is typically C:/Windows/Fonts). You can use font.paths() to check the current search path or add a new one, and use font.files() to list available font files in the search path.

Usually there are many free fonts that can be downloaded from the web and then used by showtext, as the following example shows: 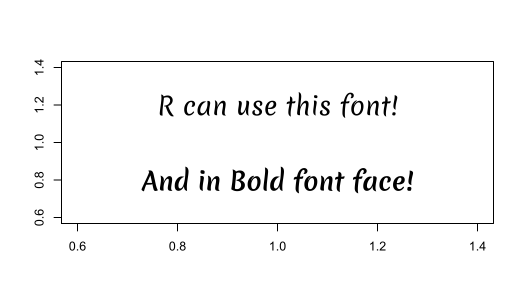 In this case we add two font faces(regular and bold) with the family name “merienda”, and use font = 2 to select the bold font face (font = 1 is selected by default, which is the regular font face).

At present font.add() supports TrueType fonts(*.ttf/*.ttc) and OpenType fonts(*.otf), but adding new font type is trivial as long as FreeType supports it.

Note that showtext includes an open source CJK font WenQuanYi Micro Hei. If you just want to show CJK text in your graph, you don’t need to add any extra font at all.

The image created by bitmap graphics devices (png(), jpeg(), …) looks ugly because they don’t support anti-alias feature well. To produce high-quality output, try to use the CairoPNG() and CairoJPEG() devices from the Cairo package.

Every graphics device in R implements some functions to draw specific graphical elements, e.g., line() to draw lines, path() and polygon() to draw polygons, text() or textUTF8() to show text, etc. What showtext does is to override their own text rendering functions and replace them by hooks provided in showtext that will further call the device’s path(), polygon() or line() to draw the character glyphs.